David Cramer, a choir lead here at St. John’s church, has listened to Fr. John Taylor’s sermons for over eight years.  When he heard two years ago that Fr. John was going to celebrate his 10 year anniversary at St. John’s in 2014, he wanted to offer his own composition to honor the occasion.

David has written many choral pieces over the years, including some sung by the St. John’s choir.  He likes to let the words dictate how the music should go.  So for this piece, David asked Fr. John for a special poem or hymn words that have inspired him; Fr. John responded with a quote from our patron St. John Chrysostom:

David changed the words slightly to give it a more encouraging note:

He then found an alternating section for the anthem from the gospel of Matthew:

He composed and tinkered on the piano, finding that Chrysostom’s words needed a strong accompaniment with unison singing.  The gospel words were a little more gentle and flowed more easily, so he wrote a more graceful accompaniment for the choir, providing a nice contrast.  He finalized the arrangement in the last six months.  Jason Francisco, another choir lead, took David’s notes and transcribed them via computer to actual musical notation, which helped the choir to practice and perform the piece.

Since the anniversary of Fr. John’s time at St. John’s fell on the same Sunday as Bishop Bruno’s visit, it was fitting to have the choir perform the specially written piece.  David says he has sung with the choirs of many churches over the years, but by far, he finds the best preaching (thank you Fr. John!) at St. John’s.  It was David’s turn on Sunday, October 26, to stir us with his music, in return for the many years of inspiration from Fr. John. 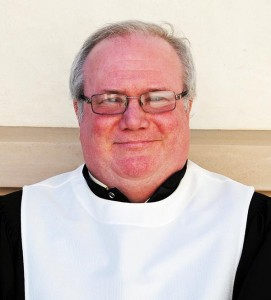