By the Rev. Christopher Potter, Vicar

Are you like me with this song? I cannot bear to type the lyrics, let alone sing them. The anguish for me comes when I must give my honest answer: “Yes. I was there.” It is agony for me because I feel convicted by what would likely have been my complicity with the crowd, and because there are too many times that I have forgotten or foiled the liberating results his crucifixion intend. 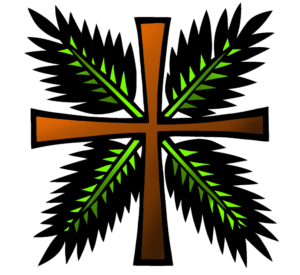 His death on the cross, in my opinion, was not an obligation imposed upon Jesus by the Creator. To say that he died “for my sins,” seems to put ME as the central reason for his death. Even the belief that Jesus died for ‘all our sins’ leaves me wondering what this could mean. We are all still sinners, repentance is obviously needed, and principally we are still living an existence defined by sin, evil, and deliberate acts of violence. What is clear to me is that my participation in these sins is not erased or washed away by the crucifixion, but rather is part of the reason why he ended up on the wood of the cross to begin with.

At the very essence of his teaching and ministry, Jesus preached freedom for the enslaved, relief for the poor, food for the hungry, and release to those unjustly deprived of liberty. Nothing, not even religious convention, would he let come between his mission to the poor and oppressed. Jesus was relentless in his work revealing the Reign of God to everyone. He taught that the utopian objective planned by God from the beginning of creation belonged first to the poor and to the oppressed (Luke 6: 20-26). So single-minded was he towards implementing God’s plan, that ultimately it became the charge, indictment and reason he was put to death.

Let me say that again. Jesus was assassinated because he was single-minded in his conviction to provide liberation to the poor, the oppressed and to the forgotten of the world.

When I resist living the way of Jesus, when I ignore the cry of the poor and snub the shouts of the oppressed, I surely find myself in that courtyard with my co-conspirators shouting, “Crucify him!” The clamor for his death arises out of complacent throats which seek to deny the significance of his message and living instead for personal comfort and security.

Yes, I was there. Yes, my choices often put me at odds with the call from Christ to work for liberation, justice and mercy. Yes, my lack of action can have an effect on the viability of the Reign of God in the world. Yes, labeling an issue “political” so I don’t have to deal with the injustices behind the label is convenient; but the Reign of God will not be realized by those who seek only their comfort.

This Holy Week, we stand both convicted and forgiven at the foot of the cross. Whatever forces – deliberate or not – which conspire to keep people enslaved, poor, oppressed and hungry stand indicted by the life of Jesus, the light of Christ. Those deadly forces once recognized and disengaged, disappear in the quiet, airy voice of Jesus, who cries out, “Father, forgive them. They know not what they do.” ⬛️

Our online regular online gatherings for this week — Sunday, March 28 through Saturday, April 3 — are below. If you aren’t on my Saturday e-blast that contains the worship links and the Wednesday Bible Fellowship, email me and I’ll add you.
• Sunday, Monday, Wednesday, Friday Morning Prayer, 9 a.m. Here’s the worship bulletin for Palm Sunday, March 28. Also: If you’ll be at St. John’s in-person Palm Sunday service, be sure to get some palm fronds. We have directions for you to create your own palm crosses at home. Can’t make it to the in-person? Look around your yard or neighborhood for palm fronds and you can make them, too.
• No Adult Forum today or Easter Sunday.
• Tuesday, Thursday, Saturday Evening Prayer, 8 p.m.
• Bible Fellowship Wednesdays, 6 p.m.

Children’s Ministry News from Corey Gonsalves:
“Hi, St. John’s families! Here’s your link to view our Mystery of Easter lesson for this week.  I encourage you to talk with your children after viewing as there is so much to think about and learn. If you’d like to know more about Children’s Ministry, please ask me.

“I am filled with joy to let you know we’re hosting an Easter egg hunt! Yes, on Easter Sunday, after our 10 a.m. service, our little ones will have an opportunity to hunt for some fun-filled Easter eggs. Please make sure to register for the service here and include your children’s names so we can get an accurate count. I simply can’t wait to see everyone!”

In the name of Jesus,
Christopher+