Fr. Christopher’s path to St. John’s is fascinating! Born into theВ Roman Catholic tradition, Christopher felt God’s call to ministryВ around the age of 13. He receivedВ a B.A. in Philosophy, with a music minor, fromВ The University ofВ San Diego, and an M.Div in Ministry, from St. John’s University, Collegeville Minnesota. He was ordained a Catholic priest in 1982, and served in several pastoral assignmentsВ in Riverside and San Bernardino Counties. HeВ took leave from parochial ministry,В married, raisedВ a family, andВ built a few businesses along the way. 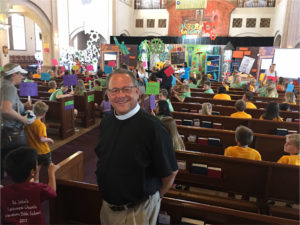 Though living and working in the secular world, Christopher always soughtВ toВ bring healing where people were broken and isolated and to offer hope to people who were in desperate straits. “I realized that my heartВ and activitiesВ had never left priestly ministryВ andВ after fifteen years as an Episcopal layman,В IВ asked Bishop Bruno to accept me as an Episcopal priest in the Diocese of Los Angeles. Now I’m a single father of an adult daughter and doing what I love most in life!”

At St. John’s, Fr. Christopher sees his priestly role as fostering and nurturing hope. “My passion and education merge at the intersections of liturgy, education,В personal responseВ to the Gospel of Jesus, and encouraging people to join in the work of fulfilling GodвҖҷs reign on earth. A priest is called to be the mid-wife of hope.В

“With humility and prayer,В priests are called toВ enter with God into peopleвҖҷs lives when loss, injury orВ death have robbed them of vision. Together with them andВ withВ GodвҖҷs grace, priests give birth to hope and rebuild lives. We find amid tragedy the unending love God has for the world as seen and taught by Jesus.”

Fr. Christopher previously served as Assisting Priest at St. Stephen’s and St. Joseph in Buena Park, and most recently as Priest-in-Charge at Church of the Blessed Sacrament in Placentia from 2013 to April 2017.В

In the Episcopal Church, Christopher served on two diocesan committees: the Bishop’s Liturgy Committee, and the Diocesan Committee on Disabilities. He also holds licenses/certifications in California as a Group Home Administrator, Adult Residential Facility Administrator, and is a Certified Instructor in Non-Violent Crisis Intervention and Prevention.

In his free time Fr. Christopher enjoys spending time with his daughter, cooking, and riding hisВ bicycleВ 15 miles a day.В

NOTE: Rev. Karen Maurer retired in September 2022 but remains a presence on the St. John’s campus.

Rev. Karen was baptized a Presbyterian, confirmed in the Lutheran Church, and finally arrived at the Episcopal Church in 1982, and was received into TEC shortly after. Before going to Seminary, Karen taught Sunday School, worked in various leadership positions which included Vestry (twice), worship leadership, Cursillo ministry, Bible Studies in two Episcopal Churches вҖ” St. ClementвҖҷs in San Clemente and Emmanuel, Fullerton. In addition, after their children were mostly grown, Karen worked for Capistrano Unified School District in the Adult Transition program, followed by employment by Casa de Amma in San Juan Capistrano.

Karen was ordained with her husband, Dave, in 2007. They served at three Episcopal churches in the Inland Empire: St. PeterвҖҷs, Rialto; St. LukeвҖҷs, Fontana; and St. ClareвҖҷs, Rancho Cucamonga. In February 2014 Karen was called to St. Wilfrid of York Episcopal Church in Huntington Beach. KarenвҖҷs beloved husband, Rev. Dave, went on permanent disability due to an AlzheimerвҖҷs diagnosis. He passed away January 6, 2016.

At St. WilfridвҖҷs, KarenвҖҷs areas of responsibility were Pastoral Care and Outreach, with a particular focus as Executive Director of Beach Cities Interfaith Services, a 501c3 organization whose mission is to offer compassionate, faith-based service to all in need.

As St. JohnвҖҷs Associate Vicar, Karen believes her role is to partner with Rev. Christopher, the people of St. JohnвҖҷs, and the church staff to present the Gospel with love, humor and compassion in every encounter, including the greater Rancho Santa Margarita community.

Karen says, вҖңAs a person, my greatest joy is found in relationships; with God, family, friends, and with all people with whom I come in contact. GodвҖҷs care for each of us is so deep, so intimate, so filled with compassion and love! My prayer is that, as a priest I might be able in some small way to convey the magnificence and beauty of our loving Triune God.вҖқ

Karen and Dave have two children, Gretchen Killebrew and Michael Maurer. Gretchen has three children Kye, Kalena and Ella. Michael has two children, Vivienne and Jackson. Karen is close to her family members, including her sister JoAnne Sand and her husband Brad; DaveвҖҷs brothers Stephen Maurer and his wife Jane, and Larry and his wife Barbara. Many nieces, nephews, grandnieces and grand nephews round out KarenвҖҷs extended family.

Before the next minister to youth comes to serve the people of St. JohnвҖҷs, Lisa Naulls, a member of the BishopвҖҷs Committee, has already begun to call together the youth of theВ parish for aВ listening session. We invite the youths (middle school, high school, college age, twenty-somethings) for further opportunities to be heard and to convey your wishes and dreams about what the church needs to be for you now, and what it might look like in the future. The вҖҳeldersвҖҷ of St. JohnвҖҷs and I (Rev. Christopher) are aware and excited with how the church is being led to new things, new ways of living the Gospel of Jesus. We recognize that past models of church, of worship, and for gathering are not well-suited for your lifestyle. The voices of young people вҖ“ your voices вҖ“ need to be heard and your hands need to be part of what builds the framework of this evolving church.

Please contact Rev. Christopher right hereВ to express your interest in furthering this holy conversation? We look forward to meeting with you again.

We are most grateful to Patti Peebles who fiercely led the St. John’s Youth Group for many years along with her team of dedicated volunteers, most recently Dave and Mary Nichols, Joe Miramontes, and Mike Olivor. Patti will now serve full time as chaplain for St. John’s School.

Roger joined St. JohnвҖҷs parish in 2010, taking on volunteer roles in the Food Pantry and MenвҖҷs ministry before becoming its Assistant Church Administrator in early 2017.

Roger was raised in a non-religious household, never really thinking about the subject until as a newlywed, his wife, Joanne, said that she wanted to find a church home for the two of them. They were baptized together in to the Roman Catholic Church when Roger was 25. They chose the Roman Catholic faith because they were drawn to its traditional liturgy and pageantry.

Being on the School Board of St. GeorgeвҖҷs Episcopal School in Lake Forest, where his two sonвҖҷs attended, led Roger to experience his first Episcopal church service in 2002. He and Joanne were already experiencing frustration with the direction of the Roman Catholic Church, so Roger suggested to Joanne that she check out a service at St. GeorgeвҖҷs too, and they both knew that they had found a new church home with the Episcopal Church. They stayed at St. GeorgeвҖҷs until a job opportunity took them to France and Denmark for five years. Based on the strength of St. JohnвҖҷs Youth Ministries, they joined St. JohnвҖҷs when they returned in 2010.

Wanting to deepen his knowledge of the Bible, Church history and its place in society, Roger enrolled in the Education for Ministry (EfM) program at St. JohnвҖҷs in 2013, and graduated in 2016. He found the program very rewarding, as it increased his knowledge and understanding of GodвҖҷs love for all of us, and how to apply that love to his everyday life.

When asked about what he appreciates about St. JohnвҖҷs, Roger said, вҖңWhat really impresses me about the people of St. JohnвҖҷs is how active and engaged they are, not only in their faith, but in applying that faith to the issues and problems they see around them. They donвҖҷt wait for permission to tackle a problem or begin a ministry, they just go about doing it.вҖқ

RogerвҖҷs hobbies include woodworking and home improvements, working on his old car, and walking his two high-energy dogs with his wife.

Dr. Johannes M. Stosch is our new Director of Music Ministries at St. JohnвҖҷs. He currently serves as Director of Orchestral Studies and conductor of the Bob Cole Conservatory Symphony Orchestra at CSU Long Beach. He was also appointed Music Director and Conductor of the Orange County Youth Symphony. He received his Doctor of Musical Arts degree from the Eastman School of Music, Rochester NY and earned two Master of Music degrees in organ performance and orchestral conducting from the Cincinnati College-Conservatory of Music.

Johannes began studying piano at age seven and moved to the organ at 12 and started to sub for church services right away. He was offered his first official organ position at age 15 at the Christuskirche in his native Wittenberg (town of Martin LutherвҖҷs reformation in 1517). He continued studying organ and conducting and organized his first choral concerts at age 16. After coming to the U.S. as an exchange student he won a high school piano competition in Georgia and was offered a full scholarship at the prestigious Schwob School of Music in Georgia. He completed his Bachelors in Voice and Organ and moved on to graduate study in Cincinnati.

Concert tours as conductor, soloist and collaborative artist have taken Johannes throughout Korea, Germany, Italy, Chile, and Japan. He has several commercial recordings to his credit. He recorded several CDs of Jewish Choral Music for Bonia Shur at Hebrew Union College, Cincinnati that received critical acclaim. His CD celebrating the renovation of Twelve Corners Presbyterian ChurchвҖҷs Casavant FreМҖres organ (Rochester, NY) has been featured on NPRвҖҷs With Heart and Voice. His principal conducting teachers were Neil Varon (Eastman School) and Mark Gibson (College-Conservatory of Music, Cincinnati).

Chrissy and Russ Hennings joined St. JohnвҖҷs church shortly before their daughter, Acacia, went to school at St. JohnвҖҷs Episcopal School. They instantly fell in the love with the school and decided to make St. JohnвҖҷs their church home as well. Chrissy was raised in the Catholic church but felt a strong connection with the Episcopal Church which is the denomination in which Russ was raised. Russ’s father was also an Episcopal priest. St. JohnвҖҷs has been a truly welcoming place for their family. Chrissy enjoys spending time with her family and friends, cooking, working out, and shopping!

Chrissy began serving as the Director of ChildrenвҖҷs Ministries in May 2021.